We wonder when we might get to herd … intelligence

This newsletter is devoted to the subject of vaccines.

Soon we will not be allowed to share with you information that diverges from the leftist government play book on the subject of vaccines.

Our Overloads at Google have decided that they have the wisdom to determine what we can and can not see.

They are banning all negative vaccine stories on YouTube. You are no longer able to see if someone “raises questions” about the vaccine.

Here is a quote from the story at Epoch Times. It is almost comical who is defending free speech here!

QUOTE: A spokesperson for the company confirmed to news outlets that accounts operated by Joseph Mercola and Robert F. Kennedy Jr., who have frequently raised questions about vaccines over the years, were banned from the platform.

“In fact, it has been broken very brazenly,” he told reporters on Sept. 29. “Because of this, it is a case of censorship, and of obstructing the dissemination of information by the media, and so on.”

When President Trump fast tracked the making of the vaccine, so that the world could recover quicker from the communist China bioweapon virus, it did not occur to many that this effort would be used to enslave people and take over entire countries. But that is what communists do. They never let a crisis go to waste.

As the water rises around us and the left cuts off avenues of rescue, it becomes more urgent than ever to share information.

Think of yourselves as individual Radio Free Europe.

You are that tiny voice in the night that lets some other desperate person know that they are not alone. You offer them uncensored news.

You offer them the comfort of knowing there are other people who have not lost they rational minds.

Here is a compilation of the recent news on vaccines.

Read it. Know it. Think about it.  SHARE it. Save it…it may soon disappear.

1- Dr. Mercola has been banned from Google owned YouTube, for the sin of offering a different medical viewpoint.

As he points out here, the left never hides what they want to do. We are just too comfortable to act on it.

How the Great Reset Will Change Your Life

QUOTE: The Great Reset, as part of the World Economic Forum’s 2030 agenda, is no conspiracy theory. It’s laid out in black and white for anyone to read. Yet, most people have no idea of the sweeping changes it will make to how you’re forced to live your life – and take away what you own.

QUOTE: This is the mindset they’re trying to program into you. As just one example, in a mid-November 2020 video announcement, Canadian Prime Minister Justin Trudeau said:”This pandemic has provided an opportunity for a reset. This is our chance to accelerate our pre-pandemic efforts to re-imagine economic systems that actually address global challenges like extreme poverty, inequality and climate change.”

We often wonder if Kennedy, from the famously hard left Democrat family, thinks about the role his family played in bringing the USA to this point; a point at which his work, dedicated to ending childhood health epidemics, is banned and mocked. We suggest that you sign up for his email newsletters, while you still can.

Safety Signals for COVID Vaccines Are Loud and Clear. Why Is Nobody Listening?

The public deserves a complete and transparent accounting of the Centers for Disease Control and Prevention’s safety monitoring, including the results of all interim reports and analyses, whether through an Freedom of Information Act request, Congressional order or some other means.

• There is a disproportionately large number of adverse events reported to the Vaccine Adverse Event Reporting System (VAERS) from COVID-19 vaccines compared with other vaccines.

3- Oh, Australia. How we will miss you now that you have gone….Communist.

In a timeline provided by Twitter account @ianmSC, the trajectory of rising COVID cases has been through the roof, despite the country’s strict COVID crackdown on its citizens. The most inane item of COVID restrictions — wearing masks to “slow the spread” — has produced no evidence of efficacy but still lives on as a topic of discussion among schools and continued restrictions.

4- Longtime Democrat political advisor to the Clintons, Dick Morris, predicts the vaccine mandates will be the end of Biden. We only pray that happens!

Is it possible that Google is looking at the tanking Biden polling and that is why they are locking down information?

QUOTE: While some polling reflects broad approval of a vaccine mandate, its actual enforcement will prove to be the single biggest blunder of the error-prone Biden Administration.

When the rubber meets the road and it comes down to actually firing teachers, cops, nurses and others — all hell will break loose.

5- We do not wish death on ANYONE. We are sorry for the passing of this person and her family.  We would however be remiss to not point out that despite THREE vaccines she died of heart complications. She blamed the unvaccinated.

A week later, Heisler started to have complications and cursed the unvaccinated. Heisler said her cardiologist tried to admit her to the hospital but there are no rooms because of Covid.

6- And then there is this story. We point these kinds of stories out because we are not being told that the vaccine does not work. And it DOES NOT WORK.

You risk complications from the unknown, untested vaccine for…what?

QUOTE: A fully vaccinated Michigan couple died one minute apart from COVID-19 on Sunday, weeks after coming down with the virus.

Cal Dunham, 59, and his wife Linda, 66, had preexisting conditions and were very cautious, Fox17Online reported. But they came down with symptoms during a recent camping trip and days later were hospitalized and put on ventilators, the report said.

7- Harvard has a 96% vaccination rate. EVERYONE has been forced to get injected to even be in the zip code. And yet, they have had so many cases, they have had to go back to virtual classes.

QUOTE: Exactly one month following the start of its fall term, Harvard Business School announced Monday it has moved all of its first-year MBA students and some of its second-year students to remote learning this week due to “a steady rise in breakthrough” COVID-19 infections among its student population.

8- It was shocking to hear these NBA players speak so knowledgeably and eloquently about their decisions not to get the vaccination. They stand in stark contrast to the garbled, ever changing, dictatorial edicts we hear from our leaders and “the experts”.

NBA Star Jonathan Isaac on Not Being Vaccinated: I Don’t Trust The Media

-These little protests are having an effect!

The NBA worries that Kyrie Irving, joining other players such as Orlando’s Jonathan Isaac, will opt out of games where the vaccine is required — including New Orleans, Los Angeles and New York City.

Isaac and Irving have been confident in their assessment of the risks from COVID. Isaac cited a religious standing, related to his Christian faith, in his decision-making process.

“At the end of the day, it’s people, and you can’t always put your trust completely in people,” said Isaac, when asked about his decision to forego the COVID vaccine.

“Liberty and freedom have combined to help make America the greatest nation in world history. The decision to get vaccinated against COVID-19 is a deeply personal one,” he continued, explaining Americans “must weigh the risks and rewards for themselves.”

10- It may now be impossible to count all the times this man has equivocated, dodged, and flipped.  Now fully vaxxed means three shots. Next week, it will be four. It will not end because THE SHOT DOES NOT WORK!

Of Course: Fauci Revises the Definition of ‘Fully Vaccinated’

QUOTE:  Fauci has moved the goalposts on what it means to be “fully vaccinated,” and I’m sure you can guess how it has changed.

For many months now, being “fully vaccinated” meant that you had to have two doses of either the Pfizer or Moderna mRNA vaccine, but now, according to Fauci, you’re not fully vaccinated unless you get the booster shot. “It is likely, for a real complete regimen, that you would need at least a third dose,” Fauci told The Atlantic in an exclusive interview.

11- There is no science. There is only stupid leftist politics.

When Will The U.S. Be Released From COVID Prison?

Quote: Japan announced Tuesday that it was lifting its coronavirus state of emergency. The country joins Norway, Sweden, and Denmark in returning to normal. America, however, will continue to be largely under the boot of politicians, bureaucrats, and meddlesome public health officials. Even convicts have release dates. But we have no idea when we’ll be liberated because there are no objective standards, only political whim.

Quote: Incidentally, the full-vaccination rate is 59% in Japan, 64% in Sweden, and 68% in Norway, all higher than the U.S. rate of 56%, but nowhere near the impossible rates that Fauci and Biden are demanding. Even Denmark, where the rate is 75%, falls short of the ruling class’ minimum.

Quote: Democrats have insisted theirs is the party of science and it is science that has determined their responses to the pandemic. But it’s clear that politics dictate their decisions, and that their rules will be lifted only when doing so benefits them and their agenda. The coronavirus outbreak has been a gift to the party that has come to exist solely to perpetuate and increase its ruling class powers and privileges.

We could go on. We could add another 20 items to this list. It is a defining issue. A tipping point.

We know that many of you have made the choice to get vaccinated. YOU DECIDED. That is all we ask. The freedom to search from among differing views to make informed decisions as to what is best for us and our families.

And the freedom to search out views that are not the lock step government/media ones being forced into our brains 24/7.

We will not rest from fighting for this and for the many people who are currently in peril for deciding not to be forced to get an untested vaccine. 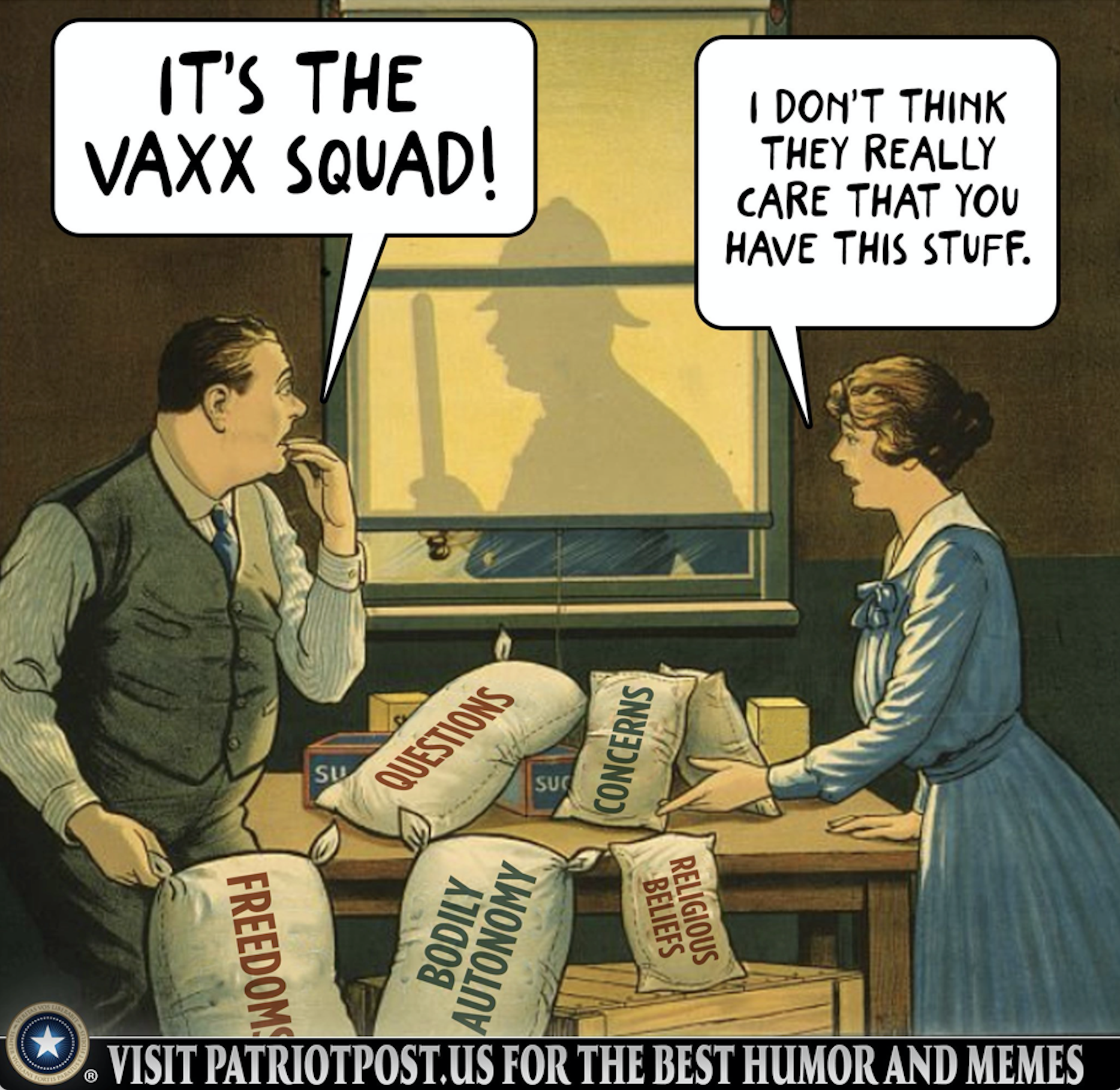