Keep your eyes on the prize

There is much going on and many people doing hard work on many issues. There is an under current of change and realignment.

When you are in the midst of profound reconstruction, it is difficult to see it. But, can you feel it?

We live in this most interesting of times.

1- The left has done it now! They have made mothers mad as wet hens! This piece tells the stories of several moms in deep blue places who are running for office because they are outraged at what the Democrats have done to their children with Covid-CCP mandates. It is a great read!

Revenge of the Covid Moms

QUOTE: These women don’t really care about The Big Lie or Russiagate or filibuster reform. They could not care less about Big Abstract Theories Of Government. They traffic in hashtags like #TeamReality, #RationalGround and #SmilesMatter. After so many years of endless yammering about conservatives, neoliberals, progressives, alt-righters, the woke, the anti-woke, the only thing they really care about is what works. What is actually happening in the real world. What is being done to their children. And they are willing to vote for whoever can actually bring a return to normal.

Radicalize is another way of saying “reconsider one’s tribe.” Burns, like Steinkamp, like Maron— like all of them—isn’t sure which tribe she belongs to. She belongs to the Kids Tribe. She likens herself to Glenn Youngkin, the surprise Republican victor in Virginia’s recent gubernatorial race, who rode to victory on a wave of angry parents fed up with the status quo. “Every Republican who misses that message of the betrayal of our kids—and there are a lot who are not fully engaged on this—is leaving votes on the table,” Burns says.

“I’ve seen movements rise and fall,” Maron tells me. “Occupy Wall Street was so omnipresent in this city, until it was completely gone.” She says she’s not interested in being a one-hit wonder. She sees herself as part of a new, emergent center, one interested in fixing the supply chain, having a functional police force, and treating the opioid epidemic. But before all that—the kids.

2- We have known that CNN was nothing more than a PR company for the Democrat Party. But, this admission on it’s collusion with the January 6 Congressional Committee is saying the quiet part out loud.

QUOTE: As CNN continues to reel from the departure of Jeff Zucker, the network is also continuing with another practice – serving as the accomplice with members of the January Six Commission investigating the Capitol Riot. One of the unintended offshoots of the Zucker debacle was a curious admission made by one of the network’s entrenched Washington fixtures, correspondent Jamie Gangel, immediately after his firing. Gangel let slip that members of Congress had reached out to her to express their dismay at Zucker’s demise.

This unintentional admission now prompts one to look over reports from CNN and see that there are blatant signs of collusion with the committee.

Jamie Gangel is a longtime name at CNN, and her reaction to the news was obviously fueled by emotion, but it also leads to a bit of exposure of the game behind the scenes. Bonchie covered Gangel’s response during a conference call with a top executive from Warner Media, the current parent company of CNN, when she expressed how damaging she felt the ouster of Zucker would be. After Warners executive Jason Kilar assured the staffers that CNN would remain on its same journalistic path, Gangel was not swayed by his words, going on to make a curious declaration.

Gangel said she received calls from four members of the congressional committee investigating the Jan. 6 insurrection at the Capitol “who felt devastated for our democracy” now that Zucker has exited CNN.

Gangel revealed that she and the committee are working in tandem. Why else would numerous committee members reach her directly to express their dismay at losing an ally in Zucker, if they were not operating from the position that he was providing his network as a conduit for the committee to deliver targeted messaging?

3- There is no longer any logical reason to keep enforcing the Clot Shot mandates.

QUOTE: Attorneys general from 16 states, led by Louisiana, filed a new legal challenge to COVID-19 vaccine mandates for U.S. healthcare workers claiming the mandates are illegal and obsolete, as the vaccines don’t work against Omicron, the dominant variant in the U.S.

The amended lawsuit was filed Feb. 4 in the U.S. District Court for the Western District of Louisiana against the U.S. Department of Health and Human Services (HHS), HHS Secretary Xavier Becerra, the Centers for Medicare and Medicaid Services (CMS) and Chiquita Brooks-Lasure, administrator of CMS.

The suit seeks to block the mandate for healthcare workers in the 25 states that previously challenged it and where it is set to take effect beginning this month.

The revised lawsuit puts forth a series of new arguments, including that the CMS mandate was designed in response to the Delta variant and is therefore now obsolete.

4- All of a sudden, the mandates are being relaxed in blue states. They say the science has changed. We think the only thing that has changed is the polling results.

QUOTE: ”I don’t think we should be surprised that the White House may be the last place to finally get some common sense,” Paul, an ophthalmologist, said Tuesday on ”Eric Bolling: The Balance.”

Democratic governors, he continued, ”are hearing from moms and dads and teachers and kids that the science doesn’t appear to be working for mass preventing infection and that they’re tired of wearing [masks]. So, I think ultimately we’re going to get to a groundswell, and I think the Democrat governors are starting to sense this.”

5- As we have said, many people are still working on many aspects of election fraud in many places.

“In the case of Maricopa, Pima and Yuma Counties, the fact that there is evidence showing illegal acts occurred, whether by intent or omission does not matter, the margin of error exceeds the margin of victory,” Finchem said. Biden was declared winner in both Maricopa and Pima County, while Trump won Yuma County.

“If we are a nation governed by the ‘rule of law,’ as we so often espouse, then violations of the law must have consequences,” he continued. “In that regard, the 2020 General Election is irredeemably compromised, and it is impossible to name a clear winner of the contest.”

“That there is no process under current law for the Arizona Legislature to ‘decertify’ an election, does not mean that the Legislature cannot provide a remedy for outcome-determinative fraud and illegality in the conduct of the election,” he added.

6- We are still watching in awe as the brave, protesting Canucks demand freedom!

Canada’s Politicians Only Have Themselves to Blame for Trucker Protests

QUOTE:  Increasingly, it appears Canadian politicians are not actually demonstrating an ability to manage their own affairs, nor to bring logic or rationality to this scenario, brought about by some of the most restrictive COVID-19 policies in the world. Nor, until now, has it appeared they cared when anyone raised objections to those policies.

Only when thousands of truckers replete with their 18-wheel freedom-fighting machines descended on Ottawa did the Canadian government begin to acknowledge the existence of dissenters in their midst. This very fact is the political casus belli for the protesters on Parliament Hill. It is also why they shouldn’t leave until some very concrete demands are both met and kept. There should be a prolonged presence of truckers in Canada’s capital. It appears to be the only language Trudeau’s government understands.

Were it not for a compliant national media willing to almost exclusively echo the claims of the government, the situation could have already resolved itself with a hasty Trudeau exit from office.

Canada’s broadcasters have focused their attention on the appearance of two flags—one Nazi, one Confederate—at protests over the past week. The culprits remain as elusive as the January 6th pipe bomber, though their presence has allowed the government to paint tens of thousands as extremists, racists or worse.

Watch Defending The Republic’s short video on the Canadian Trucker.

Support Defending the Republic and show your support for the Canadian Truckers at the same time.   Go to our shop here. 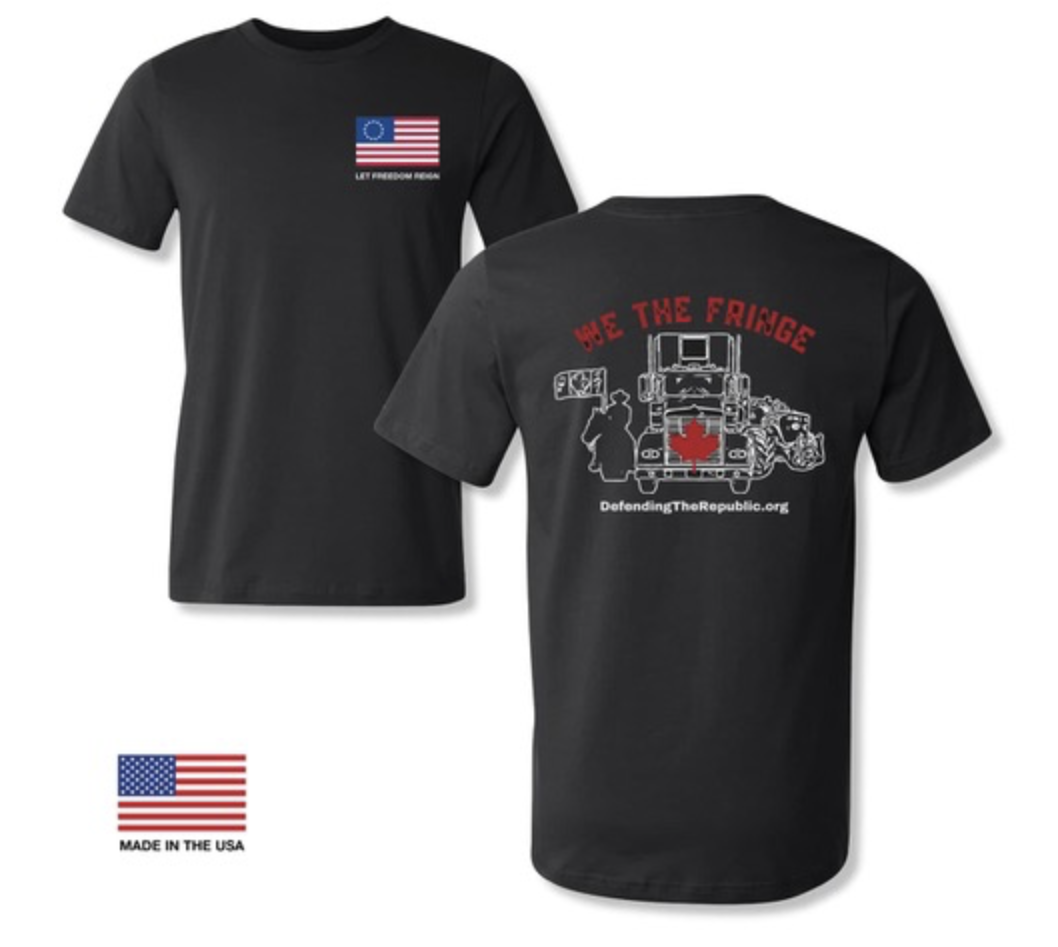 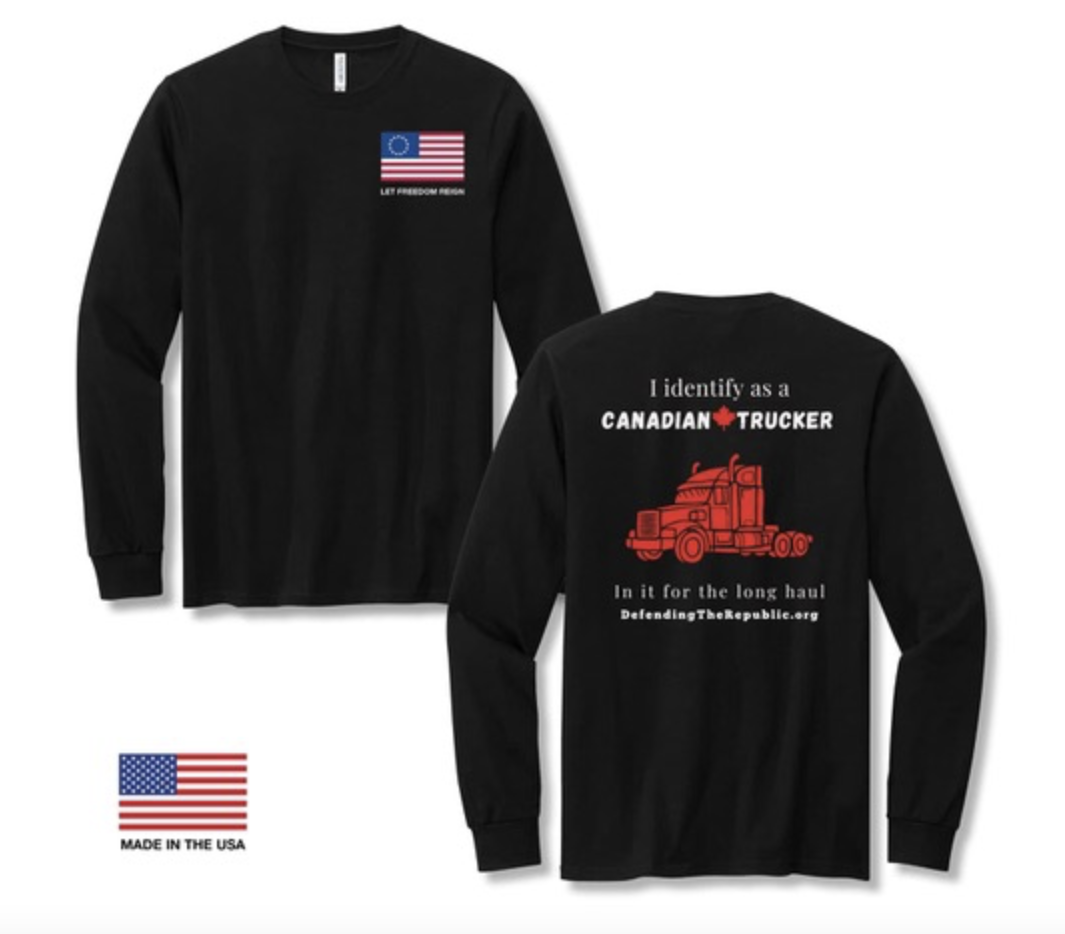