Good News Friday – Walk Out With Us

NO ONE should be forced to get jabbed with an untested vaccine against their will or through threat of job loss or education opportunities.

Millions of people have researched the vaccine and have legitimate concerns about the vaccine’s safety and effectiveness.

Defending the Republic is asking you to take a stand and join us for Walk Out Wednesday, August 11 at Noon.

Peacefully walk out of your place of employment or school if you are being forced to get vaccinated.

Even if you are not being forced, yet, stand with those who have been placed in the horrible situation by our government. Stand for the freedom to make your own decisions about your health.

Almost nothing the government has said or done to this country in the 18 months has made sense. It is constantly changing what it wants us to do based on how willing we are to just go along. At this point nothing “our leaders” are demanding is based on science. It is based on control. How much freedom are we willing to give up?

We ask you to push back. Stand up. Walk out on Wednesday.

Watch this dramatic video thru the LINK provided.  And share on your social media. 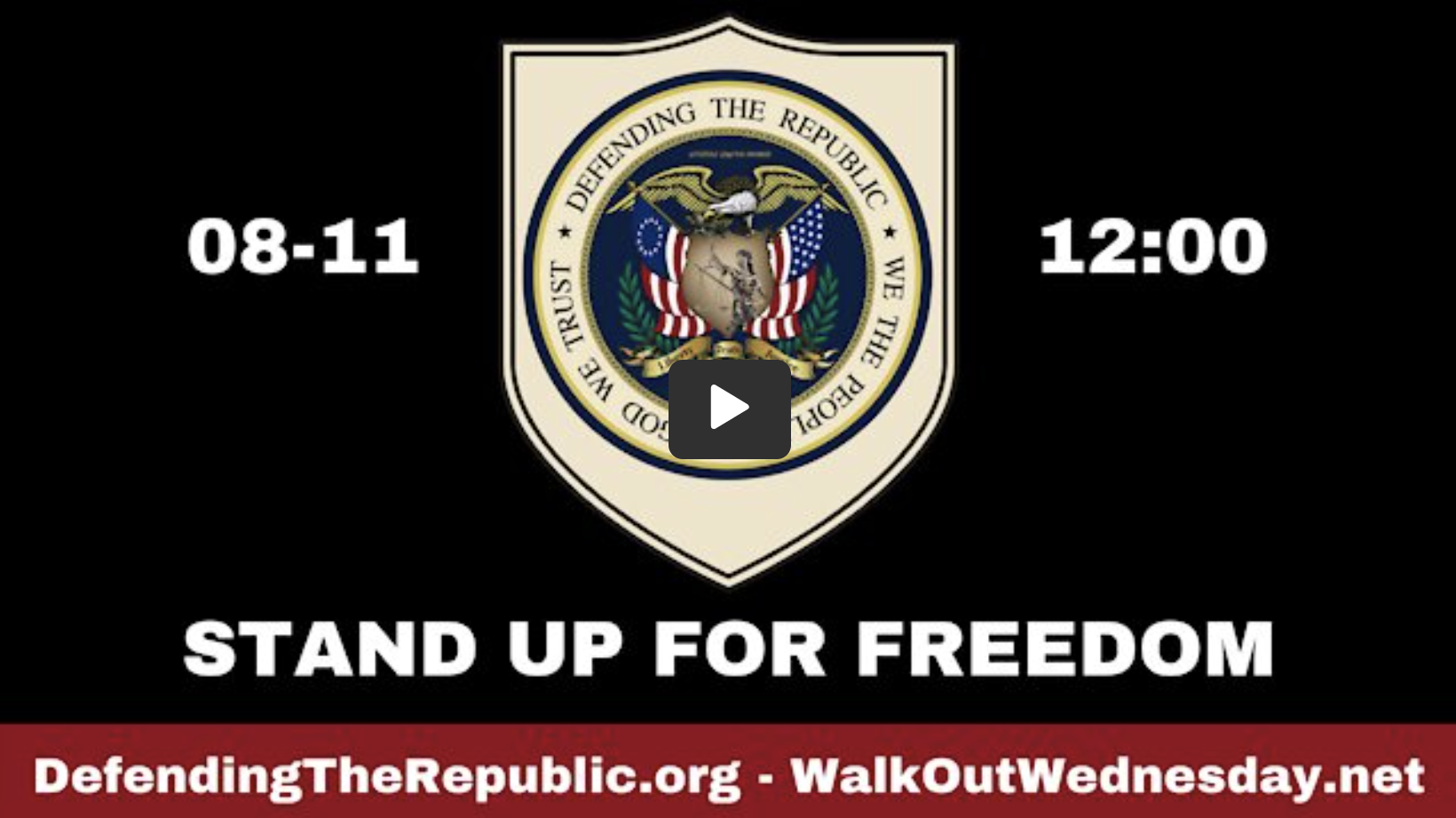 1- If you are not following Seth Keshel on his Telegram page, you might want to start.

Meanwhile, check out this story at Gateway Pundit. Look at the map and see what Seth has found about the 2020 election where you live.

2- A rare leader in the US Senate.

(FOX NEWS)
Sen. Rand Paul: Mask mandates and lockdowns from petty tyrants? No, not again. Choose freedom.  Resist. They can’t arrest us all. They can’t keep all your kids home from school.

3- When people speak up, things happen. Don’t be silent. Protect your children.

Tennessee Schools Violating Anti-CRT Law May Lose Millions in Funding Under New RulePublic school districts in Tennessee could lose millions of dollars of state funds and teachers could have their licenses suspended for teaching “prohibited concepts” related to critical race theory (CRT), according to a new rule proposed by Tennessee Department of Education.

4- The FDA has not approved the Covid-CCP vaccine, yet, but they HAVE approved this particular treatment. Let us hope more treatments that are not the vaccine follow.

(The Epoch Times)
FDA Authorizes Antibody Cocktail as COVID-19 Prevention Treatment
The Food and Drug Administration (FDA) has authorized a monoclonal antibody cocktail as a measure to prevent infection in some groups of people who were exposed to the CCP virus, the pathogen that causes COVID-19.

(BECKER NEWS)
University is Forced to Drop Mask Mandate After Attorney General Says It Violates a State Order
The University of South Carolina will be rescinding a mask mandate after the state’s Attorney General reminded USC that it violates a state order.
“We’re going to let the parents decide, but there is no confusion among the parents,” the Republican Governor Henry McMaster said. “We have seen what happens when these children are subjected to requiring masks so they can’t perform, they can’t learn.”

6- There are many people fighting back in many different ways.

(American Greatness)
Virginia Prosecutors Backed by Soros to Face Recall Trials
A nonprofit organization has launched an effort to recall three prosecutors in Virginia who were financially backed by George Soros and have implemented policies that favor criminals and reduce law enforcement capabilities, according to the Washington Free Beacon.
The group, Virginians for Safe Communities (VSC), is going after prosecutors in the Northern Virginia suburbs that immediately surround Washington, D.C.: Buta Biberaj in Loudoun County, Parisa Dehghani-Tafti in Arlington County, and Steve Descano in Fairfax County.
All three of them were elected in 2020 after the far-left billionaire had spent over $2 million to support all three of their campaigns.

Election officials in the battleground state of Wisconsin have removed more than 205,000 voters from the rolls as part of routine work to keep the state’s registration lists as current as possible.

Conservatives filed lawsuits back in 2020 demanding that the Wisconsin Elections Commission remove voters from the rolls if they didn’t respond to mailings within 30 days.

Those lawsuits failed and Joe Biden took the state of Wisconsin over Donald Trump by about 20,000 votes.

Broward County Public Schools has changed its masking policy after Republican Florida Governor Ron DeSantis released an executive order giving parents the power to decide whether their children should wear masks at school.

9- This is a nice piece by Jason Whitlock on the joyous American Olympic wrestler, Tamyra Mensah-Stock.

(The Blaze)
QUOTE: Mensah-Stock’s parents laid an incredible foundation of support for their kids. That foundation launched a daughter all the way to the Olympics. It was awesome to see Mensah-Stock celebrate God, her dad, her mom, and her country.

10- A positive approach by self avowed libertarians discussing all the things at a recent Freedom Fest. The event took place at the end of July.  It is worth 50 minutes to listen to this discussion.
(Jordan Schachtel Substack)

11- Over the weekend, listen to this comprehensive interview that Sidney did on Thursday with Shad Olson.  The Shad Olson Show is another excellent place to get honest information. Add his show to your list of places to go and to share.

We will leave you, at the end of this first week of August 2021, with Hope.  People are fighting back.