A bad week for the left, is a GREAT week for LIBERTY!

It has been a bad week for the Biden Regime. The Biden economic news on inflation is heartbreaking with 7% increase in costs. Biden polling numbers are historically low. Biden gave an ill-received speech in Atlanta about “voting rights”  that even the Democrats in Georgia refused to attend.

The next day Democrat Senators told everyone they would not support the end of the filibuster, dashing hopes that the disastrous voting bill could pass. Covid-CCP cases are soaring.

AND, The Supreme Court blocked the use of OSHA to enforce the Biden vax mandates on companies with more than 100 employees.

Defending The Republic is litigating numerous cases against the government and the unconstitutional mandates. 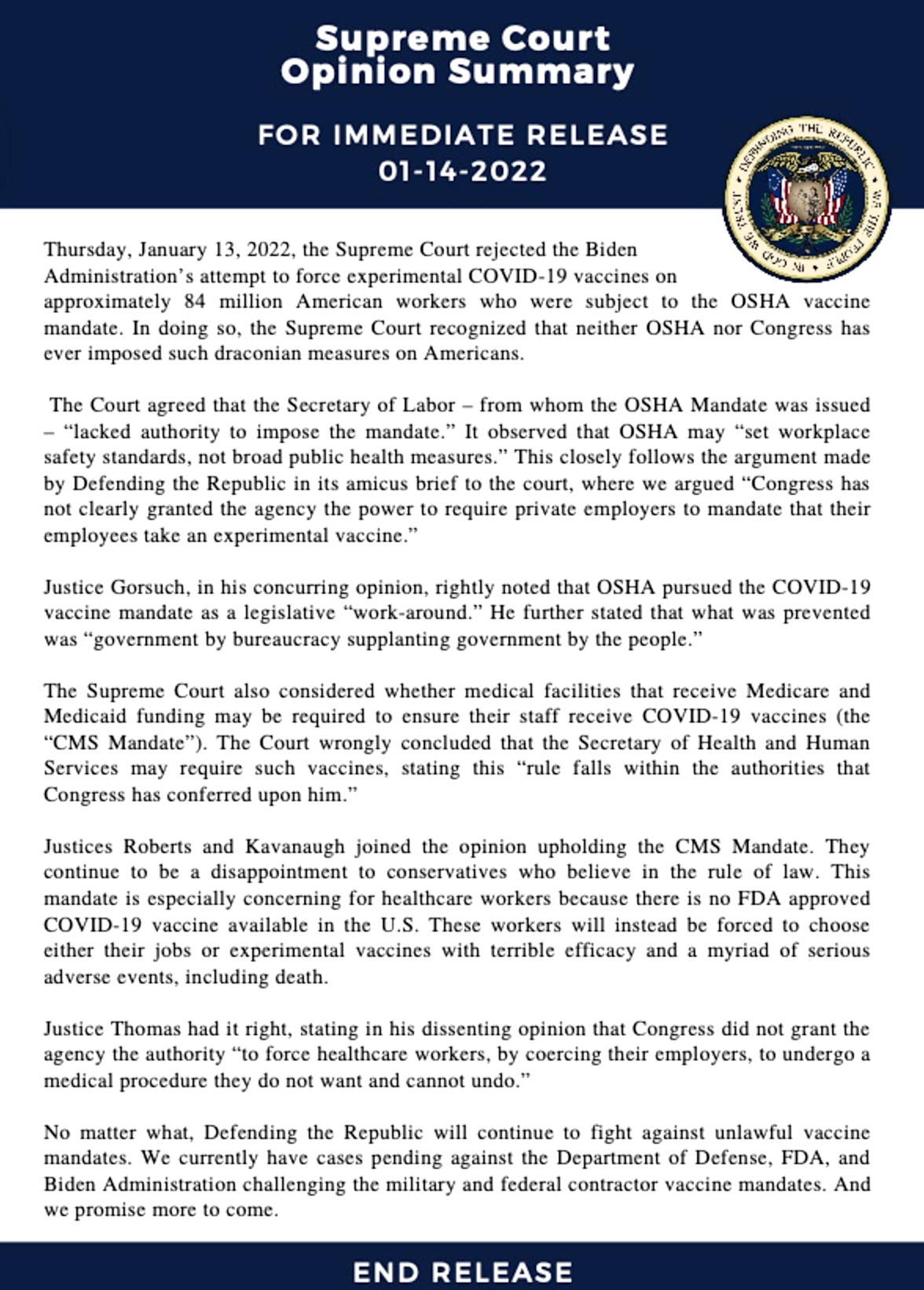 Please watch this interview with Sidney Powell on Frank Speech TV from Wednesday night. It is a summary of where we are and what Defending The Republic is currently working on.

While his overall approval is historically low, the details are even worse.

New Poll Has Biden Circling the Drain and Going Down Fast

QUOTE: The new Quinnipiac poll definitely has Biden circling the drain and going down fast.  He’s in a death spiral across all categories and all groups.

Biden’s approval rating has cratered to 33 percent, with 53 percent disapproving. In November, it was 36 percent approval, so it’s still continuing to go down. It’s worse among independents at 24 percent and among Hispanics, it’s only 28 percent. Those are two numbers that Biden has to cringe at when he looks at them. Without them, Democrats are up a creek without a paddle. But Biden is down even with Democrats. He’s dropped 12 approval points with Democrats since November, from 87 to 75. I’m inclined to think that’s progressive flight since he hasn’t been able to deliver on the free stuff that they want including the Build Back Better bill.

2- Finally, we are getting some buy-in to immunity.

QUOTE: In a sign of sanity returning in the U.S., but also for economic reasons, The NCAA announced this week that athletes who had the COVID do not have to get vaccinated and can participate in sporting activities.

These athletes will be able to participate for 90 days after coming down with COVID.

The ninety days conveniently gets them past the NCAA basketball tournament, “March Madness”, where they make tens of millions of dollars for the association and for the participating colleges to help fund their programs.

3- More and more parents are getting involved in school issues for ever growing lists of reasons.

QUOTE:  The banquet hall buzzed with impassioned chatter as parents, friends, first-time school board candidates, and other locals congregated for a Saturday morning town hall that felt more like a strategy session. After two major public school districts, Milwaukee and Madison, shut down yet again and blamed COVID, parents were fired up.

Talk of critical race theory, leftist administrators, mask mandates, and school shutdowns hummed through conversations with the kind of first-hand animation that could propel once-complacent Wisconsin parents into a movement of activists capable of unleashing an unquenchable red wave in the Dairy State. They saw what happened in Virginia, and now they want to bring it home.

4- The Democrats cheated in Wisconsin in 2021. This week, we finally got a ruling on the illegal use of absentee drop boxes.

This is a massive ruling and has implications not just in Wisconsin, but in many states that illegally slipped in the use of ballot boxes to collect absentee ballots.

(Wisconsin Institute for Law and Liberty)

The Wisconsin Institute for Law & Liberty (WILL) filed a lawsuit on behalf of two Waukesha County voters in June 2021 challenging the legal status of absentee ballot drop boxes after WEC issued unlawful guidance to clerks, in 2020, encouraging the use of absentee ballot drop boxes, and telling voters that anyone else can return their ballot for them.

5- A few weeks ago we sent you this Tool Kit for staying healthy in conjunction with Dr. Bradley Meyer and the Defending the Republic documentary – “Doctor’s Orders”.

The documentary has been watched over 265,000 times. We have received a lot of feedback on the Tool Kit and are offering it here again.

These are supplements you need to be taking daily and have on hand if you get ill. More than likely, there is NO ONE who will give you this guidance. When you get Covid-CCP, you are on your own.

Life is moving fast so…