Are there any adults in charge?

Are there any adults in charge?

Another week dawns as unsettled and disturbing as the last.
We ask for your continued prayers for the people who have been abandoned and betrayed by the Biden Administration in a country now controlled by medieval terrorists.
Read this poignant piece on where we are at the moment.

After the Fall by Peter Savodnik.

Salena Zito writes movingly on why Americans care so deeply about Afghanistan.

1- The penny has dropped about the real dilemma that the Democrats, and more broadly the country, is in.
Now, as the majority of the country realizes that Biden is not competent, what happens next? There is no clear or good answer.
As War Room’s Steve Bannon often says: “Elections have consequences. Stolen elections have dire consequences.”
We share this CBS poll only because we are stunned that even they are showing that 51% of the country thinks Biden can not do his job.

And it is not just in America. People worldwide are recognizing our dismal leadership quandary.

European Union and U.K. leaders have voiced their criticism of how U.S. President Joe Biden handled America’s withdrawal from Afghanistan, a stark difference from the praises they gave at the beginning of his presidency.n “We lived a little bit the great illusion,” said French Parliamentarian Nathalie Loiseau. “We thought America was back, while in fact, America withdraws.”

2- Mail-in-ballots are a totally unreliable method of voting. Here is why.

Nearly 15 Million Mail-in-Ballots Unaccounted for in 2020 Election, Report Says
QUOTE: In the November 2020 general election, whose chaotic results have been vigorously disputed, almost 15 million mail-in ballots went unaccounted for, according to a good-government group that focuses on electoral integrity.

3- Things that make you say….hummmmm.

4- It is clear that the vaccines are not stopping people from getting sick, as you can see from this chart on the numbers in Israel, which has almost 85% vax rate.
Ironically, the people who got sick while not being vaxed are now protected to a greater extent than those who got the untested, unproven jab of mystery juice. 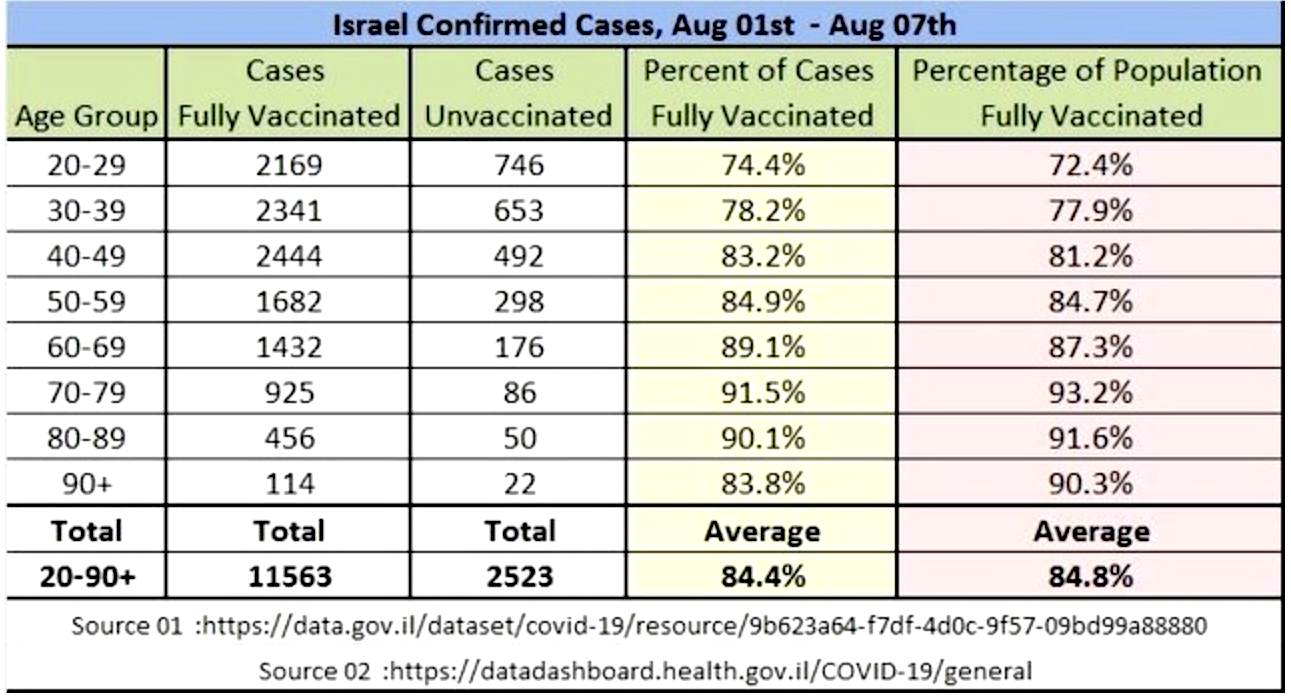 5- People in Australia are struggling under more draconian rules that are stripping all of their freedoms.
The truck drivers of Australia are planning to shut down the country in order to bring down the dictators.  The drivers are telling Aussies to stock up on food for a couple of weeks. We will be watching this.

Here is another story from Australia where children were forced into a stadium to get vaccinated. Basically  the entire country of Australia is now in total lock down. This is our future, unless we can stop it all now.

6- Masks do not work to protect you.

They are a symbol of fear and compliance. But, guess what really does work to protect you that is rarely mentioned anymore?
Washing your hands!!
Dr. Mercola gives you the data/facts/science/studies from a time before things like masks and hand washing were political issues.

7- Dave Rubin’s guest on this podcast offers some unconventional information on how to improve your health. Again, we are not doctors. We do advocate that your health is your responsibility and to do the research. Healthy people are hard to push around or scare.

The Food & Drink You Should Avoid Is Not What You Think | Ben Greenfield InterviewThe Rubin Report
Dave Rubin of The Rubin Report talks to human performance consultant Ben Greenfield. Ben explains why there is no one single diet that works best for everyone and how you can use testing to figure out what your body needs.. He also shares research related to the habits of supercentenarians and it probably isn’t what you think. He also names the one oil that must be avoided.

8- One of our favorite newspapers, The Epoch Times, has a wonderful resource page of Documentaries. Watch some of these and share them.
You may have to subscribe to view this page. We highly recommend that you support the real journalism done by real journalists with your dollars.

###
We will have more for you as the week progresses.
Pray. Read. Share.